The efforts of the Parsi Zoroastrian Anjuman of Secunderabad and Hyderabad (PZASH) in greening of the twin-cities’ Tower of Silence and other areas, was recognized by the governor of Telangana and Andhra Pradesh E. S. L. Narasimhan at a function on March 16, 2018 at the Taj Krishna Hotel. Trustee Omim Debara, who received the memento on behalf of PZASH, explained that “after last year’s success in planting 3,000 saplings in which 95% of the plants survived, the Confederation of Indian Industry (CII) asked for a repeat performance. I set a target of 14,000 saplings and approached Maj Gen Naozer Patell of Secunderabad (Retd), who put me in touch with the army officials at the sub area base of the Secunderabad cantonment, who in turn undertook the responsibility of planting 10,000 saplings in the cantonment area. We planted an additional 3,000 saplings at the Tower of Silence grounds (whose area is approximately six acres), also at gardens and farms owned by fellow Zoroastrians and at my Pavini Resort in Moinabad, Hyderabad. The CII also presented a memento to the Army for planting 10,000 saplings and PZASH for the 4,000 saplings.” 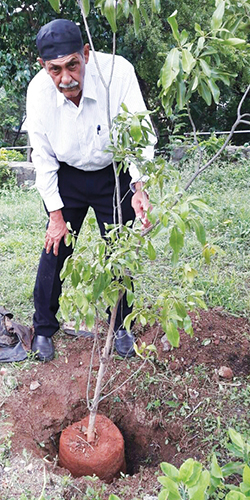 Volunteers at Hyderabad’s Tower of Silence adding to the greenery

About 25 Zoroastrians had turned up on the day of the tree plantation at the Tower of Silence, in June 2017. The plants were supplied by the Telangana State government, through various nurseries of the Greater Hyderabad Municipal Corporation (GHMC) and Hyderabad Metropolitan Development Authority (HMDA) of Hyderabad. Debara added, “Apart from this, 50 babool saplings presented by a well-wisher were also planted. These babool saplings are important to us as we use only babool wood in our agiaries as it does not generate black smoke.”PZASH trustee Homi Chenoy, mentions that “the saplings at the Tower of Silence are very well looked after by the caretaker Jimmy Kapadia and his helper who is a gardener… the trees are growing well and flourishing.” Trustee Aspi Debara, who was present at both the planting of trees at the Tower of Silence, as well as the function at Taj Krishna says, “CII felicitated and recognized various organisations which had planted trees on a large scale and PZASH was happy to be a part of the plantation drive.” According to trustee Kersi Patel, “The chief minister of Telangana, K. C. Rama Rao takes great interest every year in creating greenery in our state. Every year, we increase the area of plantation at Parsigutta (towers of silence), which also happens to come under the Chief Minister’s constituency. Planting thousands of saplings at Parsigutta has now become a yearly affair. On behalf of the PZASH, my wife Havovi and I hired a tempo and brought back 500 plants from the GHMC nursery in Secunderabad, which we placed in the Anjuman compound for distribution. Plant lovers from our community came and collected fruit trees as well as flowering and ornamental plants such as bamboo, bougainvillea, tamarind, custard apple and guava trees to plant in their gardens.”